March 16, 2014
I've been a computer geek for ages and here are my conclusions. I've been gathering as much information as I could during these days, and there are many variants of Ramsomware from apparently different authors. Some of them do not completely encrypt your files, except their first 512 bytes by which it's possible to decrypt with an easy-to-use tool voluntarily made by BleepingComputer programmers [Link]. There's another variant that entirely encrypts your files but, due to a failure in its design, it uses a much weaker 128 bits encryption instead which can be easily broken a standard computer in a matter of hours. [Link]

Then there's the newest, known as CryptoDefense that completely encrypts your files.

If you were unlucky enough to get in contact with the latter and if you want some more technical information about it, here's my analysis. 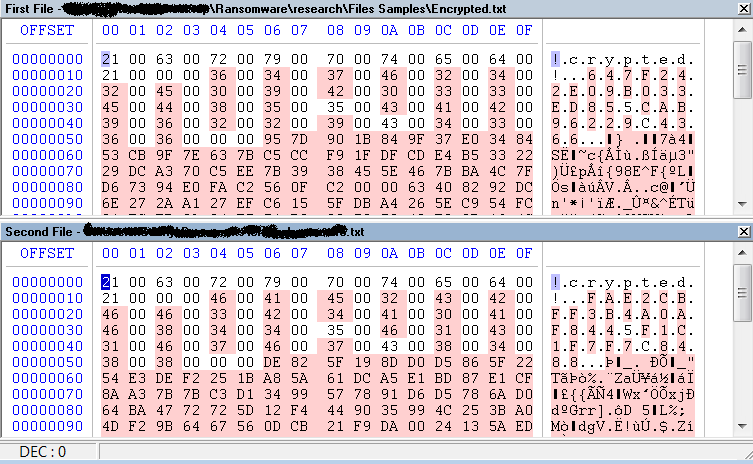 HEXCMP comes visually effective when comparing two binary files. These two encrypted files belong to two different computers that were hit by the exact same malware. As you can see, the first  !.c.r.y.p.t.e.d.!... string is the same in both files, except for the HASH-looking 32 characters string that goes after it. Is it perhaps MD5? If so, what is the purpose of using a HASH in each file?

Note: It seems that the encrypted file data starts at address (decimal) 86

Coincidentally, the crooks' website that allows you to test-decrypt one file is able to tell whether the file you upload belongs to you or not.

So, what happens if you upload someone else's file into the server?

Interesting... How does their server determine whether it is your file or not? The answer seems to be in the mentioned hash string.

Now, what happens when you upload a random file? (ANY file)

Error reads: "CryptoDefense can not identify the encryption algorithm."

How about tricking their server?

If we take a look at the crook's video on YouTube, he shows you how his own files are encrypted. This exposes something interesting...

Now, the first file (from someone else) we uploaded got rejected with "You uploaded don't own file".

Now let's see what happens if we visit the server with '2g' ID and a corresponding HASH-looking string? Both the ID and the HASH-string are related after all, right? Let's find it out....

At least I expect to get the webserver to decrypt the file, even if I end up with a corrupted file decrypted with the wrong key. Let's see...

Aha! that looks interesting. It did accept the file this time, but it seems that it knows whether decryption is right or not. Let's see now what happens if we change just ONE character from the file we recently uploaded:

Now how does it determine whether the decryption is correct or not?

[To be continued, I am working on this. There seems to be -there must be- a checksum or something. To find it out, we need the executable files that decrypt the victim's data... ]

What is the server's (TOR'd) link again?

It's https://rj2bocejarqnpuhm.onion.to/XXX where X is the ID of the victims. Now, if you start playing around with that ID, you will see the screen of many victims.

Remember that the crooks uploaded a video in YouTube?

If you carefully watch it, you will notice that his ID is only 2 characters long (as opposed to other victims which is 3 chars long) which means his own infected machine (a Virtual Machine for sure) is one of the first ones in their database.

If you add '?getpic' to the link, example:
https://rj2bocejarqnpuhm.onion.to/XXX?getpic, you will directly see the screenshot (after solving a CAPTCHA). Once you start playing around with screenshots, you will notice the following patterns:

You infected the wrong fool!

March 28, 2014
Yeah, I recovered all my files. ALL and EACH one of them without paying a PENNY. If that wasn't enough, we are also helping victims to recover their files without payment.

Dear CryptoDefense Authors, if you are reading this: SCREW YOU. Your awful script kiddie skills led our team of true experts to THWART your evil plans, even though you used state-of-the-art RSA encryption. What a bunch of fools! that's like loosing a football match having Lionel Messi, Cristiano Ronaldo and Xavi on your team.

Next step is to report all your domain names (that you lamely use to infect more and more victims).

Now, if you are a victim, feel free to write us at howdecrypt@gmail.com