April 13, 2014
I am glad to announce that we were featured on PCWorld, one of the greatest computer magazines in the world.

My old computer screen is dead, and I am using my phone to reply emails and update this blog. That's why I can't always reply quickly and why I ask for donations. Anyway... 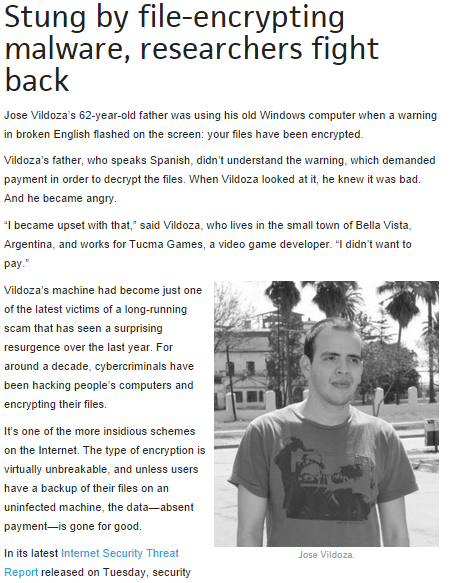 Cryptolocker and CryptoDefense have proven to be a highly profitable business warped around the anonymity of cryptocurrencies and the TOR network. You can expect more of this resurgent type of malware to sweep the Internet and spread as wildfire and, as you are reading this article, someone is writing the next cryptovirus that will enter the scene tomorrow; and I am not joking. The only fireproof measure against these nasty threats is backup using non-rewritable media such as DVD-R's and Blueray disks. Cloud storage such as Dropbox seemed safe at first glance but víctims also reported they have lost their files there.

To make matters even worse, some victims also reported being hit by two cryptoviruses. This means that they had to pay twice to get their files back. Can you imagine what will happen when more of these viruses emerge in the near future? Go figure...

There is little (to say the most) Antivirus software can do once your files have been encrypted simply because removing the malware will not return your data to its original form unless you have the key. So, better be prepared than sorry: Backup tour files.

May 13, 2017
Alright, guys. This is a tough one: However, there's no reason to claim it's impossible to decrypt victims data. These idiots always let something slip through their fingers. Their servers might be found and keys restored to their respective victims. Errors might be found in their code, their key encryption scheme may have some weakness, etc. Let's just let the experts find a way out.

By the way, if you want to temporarily protect your PC from this malware, you may do this.